The cooperative bank, Cajamar, has improved its margins, increased lending to businesses and the agri-food sector, pared back its problem assets, bolstered coverage and increased its solvency, based on consolidated earnings at 31 December 2019.

During 2019, it demonstrated its commitment to the sustainable economy having signed up to the United Nations Principles for Responsible Banking, being declared ‘carbon neutral’, and establishing new ‘green’ finance.

Grupo Cajamar has made further headway balancing its business, lending more to productive sectors and households, with a 1.5% YOY rise in loans and receivables to €29,575 million. Some 45.2% of performing retail loans have been granted to companies and the agri-food sector.

In 2019, Grupo Cajamar gained further market shares in the financial system, now boasting a 2.89% share of investments and a 2.27% share of deposits. It also remained as a benchmark institution for the agricultural sector raising its domestic market share to 14.54% thanks to its extensive and specialised range of products and services for the entire agri-food chain, its close relationship with all agents in the sector, and its efforts to transfer knowledge to businesses, cooperatives and producers.

By business volume, the cooperative bank, Cajamar, sits eleventh in the rankingof significant institutions in Spain, and seventh in terms of gross income. 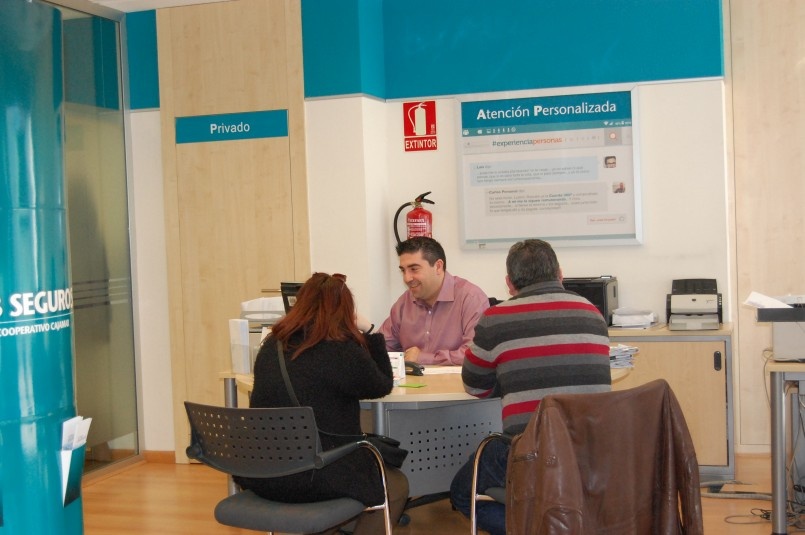 Grupo Cooperativo Cajamar’ commercial strategy, with customer experience at the heart of its business, has involved expanding the offering of value-added products and services available to the Group’s 3.4 million-plus customers, 1.5 million of whom are loyal. It is also forging ahead with its digitalisation strategy and now has 819,000 digital customers – 12.1% more YOY, 541,000 mobile banking users (+34.2%), and 288,000 customers with Wefferent accounts for those who prefer to bank directly through digital channels(up 41% versus 2018).

All this has been achieved thanks to the excellent work of the group’s 5,483 members of staff across 956 branches, 121 agencies, 1,562 ATMs and its digital banking channels, app and mobile banking.

Successful management of assets and liabilities has seen net interest income climb to a higher level than last year, despite continuing unfavourable interest rates. Grupo Cooperativo Cajamar increased net interest income by 0.6%, thanks to organic growth of on-balance sheet retail funds (+7.2% YOY) and performing loans and receivables, which are up 1.5%.

Gross income is 22.9% higher YOY fuelled by net trading income (€296 million) and the 24.1% YOY increase in the results of strategic partners.

Furthermore, the cost-income ratio improved by 10.6 pp to 50.2%, off the back of a 56% increase in net income before provisions and the decrease in operating expenses, which equate to 1.27% of average total assets.

Grupo Cajamar has made further headway cleaning up its balance sheet, using the gains generated for writing off impairment losses on assets, raising the NPL coverage ratio to 49.10%, and increasing the NPA coverage ratio to 51.52%, including the debt forgiveness in foreclosures.

Further improvements in the management of total non-performing assets, which have decreased by 20.7% versus 2018 (€509 million less), have shaved 1.56 pp off the NPL ratio to 6.07%. On the other hand, the volume of gross foreclosed assets has shrunk for yet another year, with a YOY decrease of 6.9%. This has led to the foreclosed assets coverage ratio rising to 53.08%, factoring in debt forgiveness in the foreclosure process.

Grupo Cooperativo Cajamar bolstered its solvency in 2019. The phased-in capital adequacy ratiostands at 14.69% and the group has high quality eligible capital. The phased-in CET 1ratio is also up at 13.03% and the fully-loaded ratio is at 12.32%, easilysurpassing the levels required by the supervisor, with surpluses over and above the phased-in requirements of €825 million forCET1, €474 million for T1, and €395 million for Total Capital.

Grupo Cajamar also boasts a comfortable level of wholesale funding and a healthy liquidity positionwith available liquid assets totalling €6,174 million, a liquidity coverage ratio (LCR) of 212.33%, and a net stable funding ratio (NSFR) of 124.03%, thereby complying with the limits imposed by the European Banking Authority. It also has maturities covered over the coming years and unfettered access to markets and is well equipped to generate liquid assets with a mortgage-backed bond issuance capacity of €3,434 million.

As a cooperative bank, Cajamar supports the sustainable economy and the local productive sectors it serves. This embodies its approach to cooperative social banking, which goes beyond just its financial activity because its business and social initiatives are linked to building a fairer and more balanced society in both towns and cities and the countryside.

As a founding signatory, in 2019 Grupo Cajamar ratified its support for the United Nations Principles for Responsible Banking, demonstrating its decision to align its business with the Sustainable Development Goals and Paris Agreement on Climate Change. It was also involved in other international initiatives related with sustainability as a member of the United Nations Global Compact, the Spanish Network of the Global Compact and the United Nations Environment Programme Finance Initiative. As part of its efforts, every year the group reports its carbon footprint to the leading international body in this area: Carbon Disclosure Project,being included in the ‘carbon neutral’ category as it offsets all its greenhouse gas emissions.

Moreover, it continued to host and sponsor business forums across Spain that contribute to fostering entrepreneurship, responsible finance, financial education, dialogue for development, and other social, cultural and sporting activities. In total, over 250 events attended by around 40,000 people in rural and urban areas.

Grupo Cajamar continued to work to transfer the knowledge gleaned through research, studies and tests at its two agri-food laboratories in Almeria and Valencia, which were visited by 2,988 professionals during the year, organising 104knowledge transfer events attended by 5,850 people.

Furthermore, Cajamar released a new volume of the Mediterráneo Económico collection of works entitled “The social economy in the Mediterranean”, coordinated by the chairman of the Spanish Social Economy Employers’ Confederation (CEPES), Juan Antonio Pedreño, in which representatives and experts from across the European Union and North Africa share their knowledge and outlook for this sector. The social economy Grupo Cajamar is a part of comprises 3.2 million businesses and other organisations employing over 15 million people. It is a business sector that creates quality jobs and is a conduit for sustainable and inclusive economic growth, helping to notably reduce inequalities and drive economic and social convergence. This publication was unveiled in Strasbourg on the European Day of Social Economy Enterprises.