Grupo Cajamar posts net profit of €50.1 million, down 12.3%, after reinforcing coverages and reducing its NPL ratio below 3%

As a result of Grupo Cajamar’s prudent management approach, in which balance sheet quality improvement takes priority and a substantial proportion of revenue from the business, specifically €238 million, has been used to fund provisions and write-downs and impairment of financial and non-financial assets, consolidated net profit, amounting to €50.1 million, is down 12.3% year-on-year. 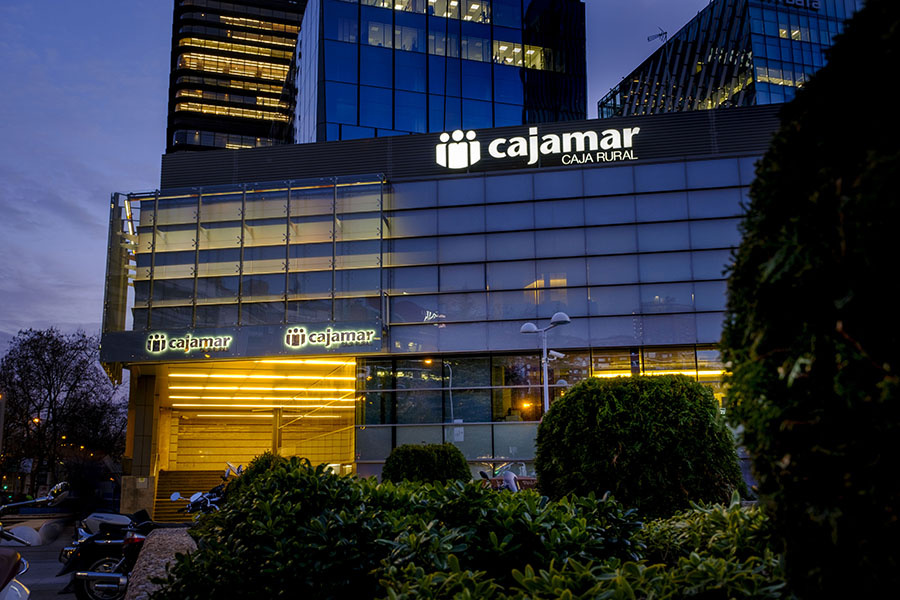 A combination of growth in the banking business (both loans and receivables and managed funds) and a decline in non-performing assets led to an improvement in Grupo Cajamar’s balance sheet in the first half of the year. Revenue was strong, the NPL ratio dropped to 2.97%, provision coverage was reinforced and capital ratios increased compared to the previous quarter. Profitability (ROE) also rose 1 percentage point compared to the end of the previous year, reaching 2.8%.

As a result of Grupo Cajamar’s prudent management approach, in which balance sheet quality improvement takes priority and a substantial proportion of revenue from the business, specifically €238 million, has been used to fund provisions and write-downs and impairment of financial and non-financial assets, consolidated net profit, amounting to €50.1 million, is down 12.3% year-on-year.

Asset quality has improved, with a decrease in non-performing assets, driven by a reduction of €359 million in non-performing loans, down 24.3% compared to the same period of the previous year, pushing the NPL ratio down 1.2 percentage points to 2.97%, 1.1 percentage points below the industry average. At the same time, net foreclosed assets have fallen by €364 million, a decrease of 34.8% compared to the second quarter of 2021. Coverage of the various components of non-performing assets has also been reinforced, both year-on-year and quarter-on-quarter. Specifically, the NPL coverage ratio has risen to 74.5 % and the foreclosed asset coverage ratio to 64.8%, including the haircuts incurred in the foreclosure process.

Good business performance, supported by growth in sales activity and increased cross-selling, has resulted in gross income of €593 million, aided by an increase in net fee and commission income, which is up 23.4% year-on-year, especially disintermediation fees (insurance, investment funds, pension plans and consumer finance), up 30.9%. Moreover, the recent rise in interest rates agreed by the ECB suggests a favourable outlook for banking revenues over the next few quarters.

Meanwhile, operating expenses have continued to shrink as a component of the statement of profit and loss and, on a like-for-like basis, have risen just 2% compared to the first half of the previous year, well below inflation, which rose at a year-on-year rate of 10.2%. 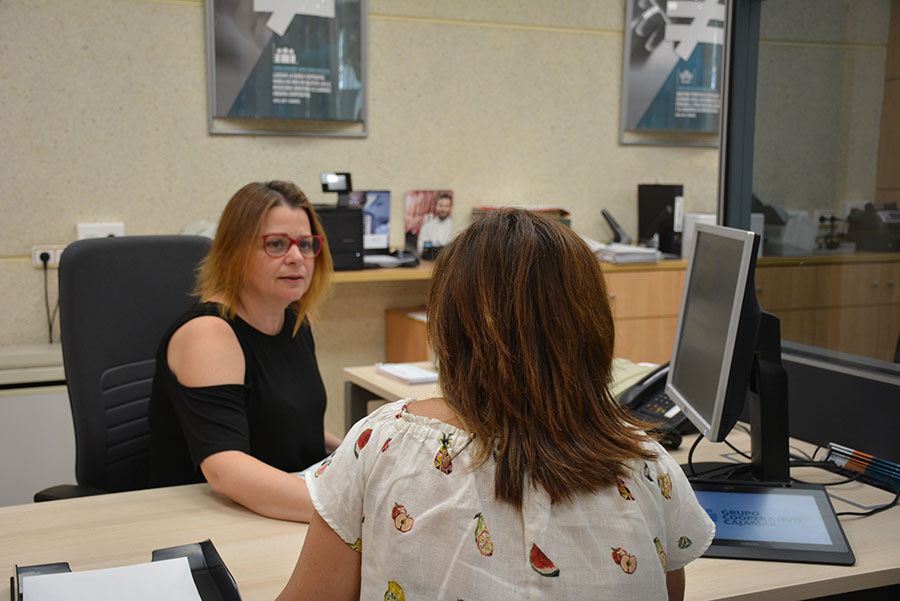 Customer service in a branche.

Successful marketing of the Groups products and services is reflected in year-on-year growth of 10.5% in total assets, to €62,292 million, and an increase in the total volume of funds managed, which stands at €97,044 million.

Assisted by the current economic situation, customer funds under management grew by €4,535 million, or 9.1%, year-on-year, to €47,188 million, mainly as a result of an increase of 14.6% in sight deposits and an increase in off-balance-sheet funds, mainly investment funds, which are up 5.4%, in spite of market trends.

Performing loans and advances to customers have grown 6.4%, to €35,075 million, in an increasingly diversified portfolio, with 83.1% of the lending going to the Group’s strategic segments, namely companies, the agri-food sector and households.

Thanks to buoyant sales activity, Grupo Cooperativo Cajamar continues to gradually expand its domestic market share, both in investment (2.9%) and in deposits (2.5%); and also in insurance, through its subsidiaries Cajamar Vida, which has a 5.2% share of the life and risk insurance market, putting it in fifth place in the ranking by premium volume, and Cajamar Seguros Generales, which has a 4% share in home insurance premiums, putting it in seventh place in the ranking.

As regards the financial solutions and payment flexibility measures offered to customers facing temporary difficulties as a result of the pandemic, the volume of ICO guarantee loans has reached €1,640 million and has decreased as a proportion of gross loans and receivables, accounting for only 4.5% of the total, with 96.3% of the transactions classified in the performing portfolio.

Preferential attention for the elderly.

The Grupo Cajamar entities have won the trust of almost 1.6 million members and more than 3.6 million customers, who are served, on a face-to-face basis, by 5,264 professionals in 868 branches and 158 agencies, 30% of which are in municipalities with fewer than 5,000 inhabitants. Furthermore, a total of six mobile branches (vehicles travelling from place to place) deliver financial services to 43 rural communities with fewer than 1,500 inhabitants, thus saving them from financial exclusion and, above all, meeting the needs of older people and other vulnerable groups.

Grupo Cajamar’s electronic, mobile and telephone banking channels and 1,514 ATMs are used on a daily basis by more than one million digital customers, that is, 11.1% more than in the same period of the previous year. These customers carried out 43 million electronic banking transactions and 52 million transactions through the app.

The Cajamar cooperative banking group’s customer recommendation indicator has risen 1.2 percentage points, above the cumulative industry average for the second quarter, and ranks sixth, while the indicator for the industry as a whole has fallen 3.4 percentage points since the end of 2021, according to the Net Promoter Score. The Group also ranks third in terms of customers’ satisfaction with their account manager, according to the financial sector customer satisfaction benchmarking study carried out by Stiga in the second quarter of 2022.

The phased-in total capital ratio stands at 15.7%, supported by strong CET1 capital, with a  phased-in CET1 ratio of 13.2% and a fully loaded ratio of 13%, easily meeting all regulatory requirements, with a surplus of €702 million of CET1/AT1 and €655 million of total capital.

In the third quarter of 2021, the Group issued €500 million of senior preferred debt, bringing the MREL ratio to 18.2%, thus exceeding the MREL requirements set by the resolution authority for 1 January 2022 by 1.7 percentage points.

At the same time, the growth in customer loans and deposits brought the loan-to-deposit (LTD) ratio to 83.8%, an improvement of 2.7 percentage points compared to the second quarter of the previous year.

Grupo Cajamar also has a comfortable liquidity position, with €13,382 million of available liquid assets, including both high-quality liquid assets (HQLA) and other discountable liquid assets and central bank deposits. Moreover, it has mortgage covered bond issuance capacity of €4,075 million. With these resources it easily meets the requirements set by the European Banking Authority, with a liquidity coverage ratio (LCR) of 189.2% and a net stable funding ratio (NSFR) of 132.8%.

Grupo Cajamar’s sustainability policy, setting out its ESG commitment, is founded on its cooperative banking model and its dedication to supporting people, companies and local production systems. Thus, having established sustainability as a cross-cutting theme of its strategic plan, Grupo Cajamar is working on the transition to a green economy that will mitigate the impact of climate change on the activity of its members and customers and on society as a whole. At 30 June 2022, 28.8% of its loans and receivables are associated with environmental mitigation activities and 28.6% with adaptation activities.

The goals of the Group’s Sustainable Finance Master Plan are to consolidate and strengthen its sustainable culture, meet the demands of international regulatory bodies, help draw up the decarbonisation roadmap for reducing CO2 emissions and reaching net zero emissions by 2050, and support its members and customers throughout the process of fair transition towards a low-carbon economy.

The Group has also established a Sustainable Bond Framework, under which it plans to issue social, green and/or sustainable bonds, as an effective means of channelling investments aimed at promoting sustainable development and the fight against social exclusion.

In its commitment to promoting sustainable finance and combating climate change, Grupo Cooperativo Cajamar supports the Principles of the United Nations Global Compact and is a member of various organisations. It is a member of UNEP FI and a founding signatory of the Principles for Responsible Banking; it reports its carbon footprint to the Carbon Disclosure Project (CDP), with an A- rating that places it among the leading, most advanced companies in terms of environmental management performance and transparency; it supports and follows the recommendations of the Task Force on Climate-related Financial Disclosures (TCFD) in respect of Sustainable Finance; and it has joined the Science Based Targets initiative, having undertaken to set Net Zero emission reduction targets.

In relation to transparency and management, it calculates its carbon footprint each year and offsets 100% of its emissions by purchasing carbon credits for the “Conservation of the Amazon in Madre de Dios (Peru)” project, thus contributing to the reduction of deforestation in the area and consequently to sustainable forest management that will generate benefits for local communities.

As the bank of choice for the agri-food sector, with a domestic market share of 15.4% in the primary sector, Grupo Cajamar offers a range of specialised services and products for companies, cooperatives and producers, as well as technical advice and knowledge transfer programmes, designed to help improve the competitiveness, funding, information management and digitisation of the Spanish agri-food sector.

Through the Plataforma Tierra platform, it promotes actions that foster innovation, digitisation and sustainability in the agri-food sector, such as the implementation of its digital irrigation and fertilisation tool, which has been used to produce 296 irrigation plans and 184 fertilization plans for 610 farms. From January to June this year, the research, studies and trials carried out in Cajamar’s experimental centres in Almería and Valencia were publicised through 48 knowledge transfer events, both face-to-face and online, that attracted more than 5,500 participants.

Grupo Cajamar has also attended international and national trade fairs, including Fruit Logistica, Alimentaria, Meat Attraction, Agroexpo and FIMA, accompanying agri-food companies to help them promote themselves and implement their national and international expansion plans. It has helped organise business forums and meetings, creating awareness of the challenges facing Spanish companies and the opportunities afforded by the Next Generation European funds to modernise their business and innovate.