Revenue generation and a decrease in non-performing assets key to the successful management of the organisation this year, while higher provisions and coverage were set aside and solvency also improved.

Grupo Cooperativo Cajamar continued to boost the quality of its assets during the third quarter, furthering the progress made throughout 2021, earmarking most of its revenue generated thanks to its solid business performance and gains on financial assets and liabilities to bolster coverage, provisions and write-downs of non-performing assets. In turn, this has helped boost the Group’s solvency. Specifically, €441 million was earmarked for financial and non-financial asset coverage, which is 46.6% more than during the same period in 2020.

Successful management of non-performing assets also led to a further reduction in the NPL ratio to 3.9% – below the sector average. In August, this ratio stood at 4.43%. The NPL coverage ratio also increased by 17.2 pp YOY to 73.3%. Moreover, the capital adequacy ratio was improved by 1 percentage point to 15.7%, following 14% growth of eligible own funds.

The decent business performance, with improvements in all margins and lower operating costs, has resulted in a pre-tax profit of €96.4 million, after setting €441 million aside to enhance coverage and provisions, while consolidated net profit now stands at €62.3 million – 327.2% higher than in the same period of the previous year.

The 15.5% increase in net interest income was due to the revenue generated from finance activity to businesses and households of which has risen with the revival of the economy, and from cutting interest expenses. This combined with the decent results posted by investees and gains on financial assets and liabilities helped push up gross income to €1,156 million – 39.8% higher YOY.

Fee and commission income generated by the commercial arm is up 6.5% YOY, especially due to advisory service fees in international operations, insurance, financial markets and payment services, with annual increases of 63.6%, 14.1%, 13.5% and 10.5%, respectively.

The cost-income ratio likewise is now 36.9%, having improved by 14.8% compared to the same quarter a year earlier, due to an increase in income of 39.8% and a decrease in expenses. The ratio not including gains on financial assets and liabilities also shrank by 7 pp to 62%.

The success of the commercial arm is reflected in the YOY growth of 9.3% in total assets to €57,594 million and an 8.5% increase in total volume under management, which is now €93,530 million.

Customer funds under management rose 12.1% compared to the same period in the previous year and now stand at €44,466 million, with the 15.7% increase in demand deposits and 42% advance in mutual funds standing out.

Performing loans to retail customers grew by €1,793 million (5.7%) to €33,169 million, with a notable 6.6% increase in loans to the agri-food sector versus the same period a year earlier.

Looking at financial solutions and flexible payment terms for customers who have run into temporary difficulties caused by the pandemic, only €61.9 million of the moratoria granted totalling €1,036 million remains outstanding. Only 0.4% of this amount is doubtful. Loans guaranteed by the Spanish Official Credit Institute (ICO) total €1,858 million – 79% of which are to businesses and 8.8% to households. State-backed credit makes up 5.3% of gross loans and advances.

Thanks to its successful commercial activity, Grupo Cooperativo Cajamar still ranks ninth among Spanish significant institutions by turnover and eight by gross income.

The cooperative bank Cajamar continues to broaden its offering of value-added products and services, boosting the loyalty of its more than 3.5 million customers and making further progress with its digitalisation strategy. Thanks to all this, it now boasts more than a million digital customers (12.6% higher than a year ago), 851,000 of whom using mobile banking, which is 23.7% more YOY.

This has all been made possible thanks to its 5,330 professionals working in 898 branches, 151 agencies, 1,548 ATMs and its digital banking, electronic banking and mobile banking channels. 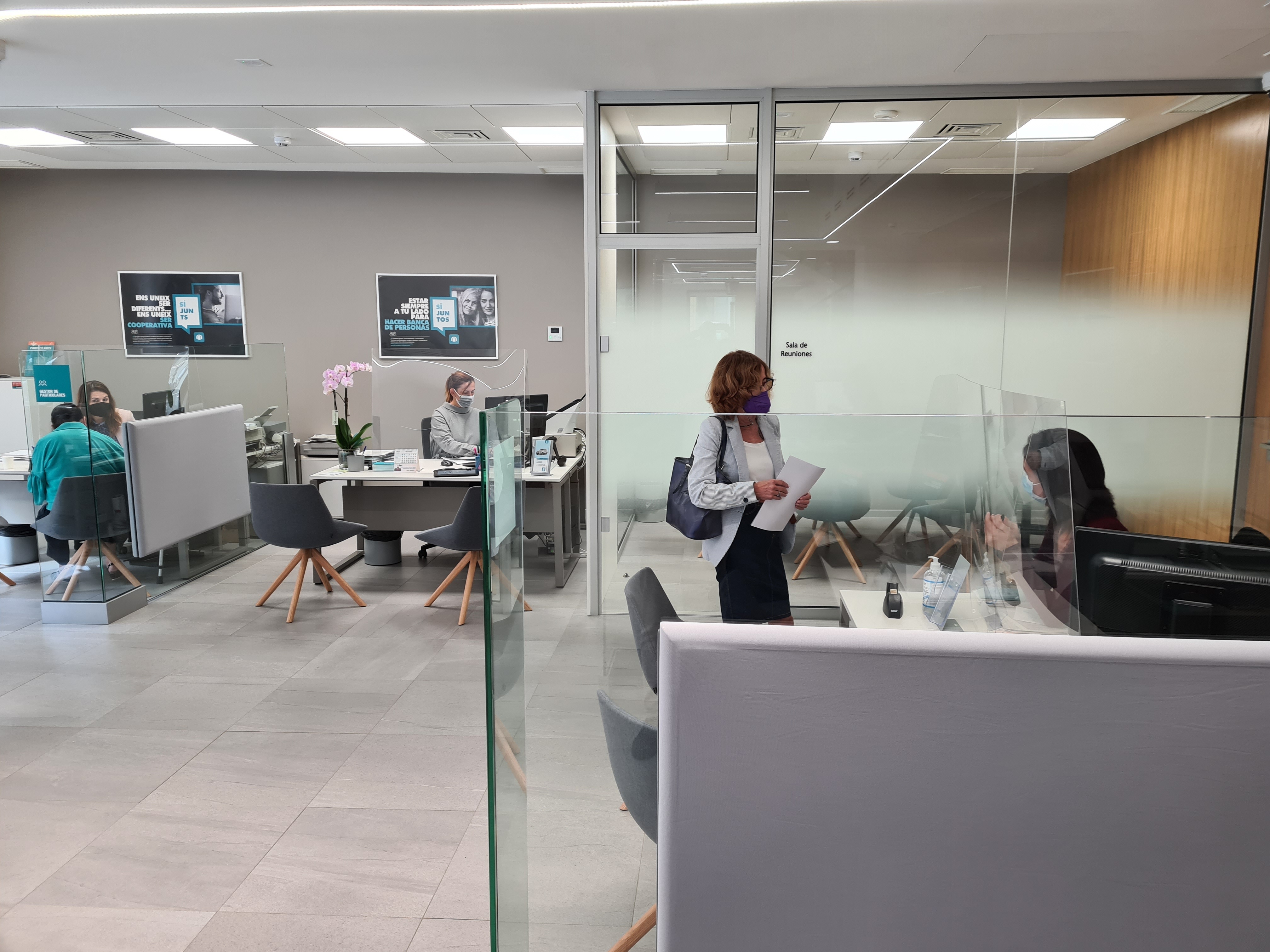 Grupo Cooperativo Cajamar continues to clean up its balance sheet thanks to its successful management of total non-performing assets, which are down €344 million (-19.6%) compared to the same period in 2020, while the NPA coverage ratio has increased by 17.2% YOY to 73.3%.

The net volume of foreclosed assets shrank by 25.2% to €337 million, not factoring in the agreement to sell off the Jaguar portfolio, which will be completed during the last quarter of the year, while strengthening, together with the decrease in total non-performing assets and the reinforcement of coverage. The Group also boosted the foreclosed assets coverage ratio to 65.8%, after considering debt forgiveness in foreclosure procedures. This represents a 10.2 pp YOY improvement.

The capital adequacy ratio is 15.7% having improved by 1 pp, especially thanks to the 14% growth YOY of eligible own funds. The phased-in CET 1 ratio stands at 13.3% and the fully loaded ratio is 12.7%, comfortably surpassing regulatory requirements and all the more after the measures implemented by the ECB in response to the Covid-19 crisis. The buffer over the supervisor’s requirements stands at €1,554 million for phased-in CET 1, at €1,184 million for T1 and €1,291million for total capital.

A key milestone in the third quarter was the €500-million placement of senior preferred debt with a coupon of 1.75 %, taking the MREL ratio to 15.8%. This equates to a buffer of €455 million over the interim requirement set at 14%, while work to meet the MREL requirements imposed by the supervisor for 1 January 2025 continues.

Meanwhile, customer deposits continued to grow, once again improving the loan-to-deposit ratio to 84.9%, 4.2 pp below the figure for the same period in the previous year.

Grupo Cooperativo Cajamar enjoys a healthy liquidity position having posted a €14,400-million increase in available liquid assets, including both high quality liquid assets (HQLA) and other discountable liquid assets and deposits in central banks. The Group also has the capacity to issue a further €2,684 million in mortgage-backed bonds.

All of this sees the Group easily complying with the limits set by the European Banking Authority, with a liquidity coverage ratio (LCR) of 252.3% and a net stable funding ratio (NSFR) of 139%.

Go-to bank in the agri-food sector

The cooperative bank Cajamar remains the go-to bank in the agri-food sector, enjoying a market share to 15.1% in the primary sector (arable and livestock farming and fisheries). Its knowledge of this sector enables it to offer a wide and specialised range of products and services, as well as technical and specialist advice and transfer of know-how to companies, cooperatives and producers.

During the third quarter, Cajamar signed a partnership agreement with the Spanish Ministry of Farming, Fisheries and Food to carry out projects to boost the competitiveness of, financing to and information management in the farming, fisheries and agri-food industry in Spain. This agreement also aims to provide lines of credit for projects financed using European funds, encourage the uptake of farming insurance and support trade bodies and other associations in the sector.

The Plataforma Tierra platform launched this year to facilitate and accelerate the development of new solutions for its partners and customers has started operating with the development of artificial intelligence models with IBM to boost the efficiency and sustainability of farming operations.

Cajamar continues to drive innovation and sustainability in the agri-food sector through research, studies and testing at its laboratories in Almeria and Valencia, which hosted 500 professionals during the year. It also organised more than 80 virtual and face-to-face knowledge transfer activities, which attracted 7,500 participants.

During the first nine months of 2021, Grupo Cajamar supported the agri business sector by attending trade fairs, and organising forums and meetings to discuss the challenges faced by the business community and the opportunities to modernise and innovate their operations available to them thanks to the European Next Generation funds. The Group has also supported exporters, having signed sector and business agreements to partner on promoting foreign trade and responding to exporters’ needs for finance for domestic and international expansion.

Between January and September, it continued to share knowledge through new sector specific publications including: ‘Sustainable and innovative enotourism: success stories around the world’, which received an award from the International Organisation of Vine and Wine; ‘Observatory of the Spanish agri-food sector in the European context: 2020 report’; ‘Observatory of the agri-food sector in Spanish regions: 2019 report’; and Analysis of agri-food exports: 2020 report’, along with the regular reports on the status of the various markets.

It also published volume 34 of the Mediterráneo Económico collection of works entitled ‘The future of pensions in Spain’, coordinated by the chair of Foundations of Economic Analysis at the Complutense University of Madrid and deputy director of Fedea José Ignacio Conde-Ruiz.

Cajamar’s cooperative banking model is characterised by the bank’s support for people, businesses and local productive systems, promoting the social and charitable economy and with a sustainability policy at the core of its strategy covering three key areas: economic-financial, social and environmental.

In 2021 BCC-Grupo Cajamar drew up its Sustainable Finance Master Plan to build on and reinforce its sustainable culture, respond to the raft of regulatory aspects involving a large number of European and international regulatory bodies, and contribute to devising a decarbonisation road map to cut CO2 emissions and achieve net zero by 2050. It is also actively accompanying its partners and customers during their fair transition to a low carbon economy. Grupo Cajamar also leads the way in the financial sector in the management of environmental, social and corporate governance risks, according to the ASG Sustainalytics Risk Rating report, with the Group achieving an ESG score of 8.4 (insignificant risk), which is an improvement on the score of 13,7 (low risk) achieved in 2020.

BCC-Grupo Cajamar is also a member of several organisations working to champion sustainable finance and curb climate change. It is a signatory of the United Nations Global Compact, a member of the UNEP FI and a founding signatory of the Principles for Responsible Banking. It reports its carbon footprint to Carbon Disclosure Project (CDP), achieving a score of A- which ranks it among the leading and most advanced companies for its performance and transparency in environmental management. It also champions and follows the recommendations of the Task Force on Climate-Related Financial Disclosure (TCFD) regarding sustainable finance matters. It also recently joined the Science Based Targets initiative, pledging to establish Net Zero emissions reduction targets.

Furthermore, Grupo Cajamar has launched several financial initiatives designed to devise and measure new indicators related with climate change and other environmental aspects, their impact on the loan book and other steps to transparently disclose and manage its carbon footprint.

Regarding transparency and management, every year Grupo Cajamar calculates and offsets 100% of its emissions, with 100% of its total energy consumption covered using renewable sources.